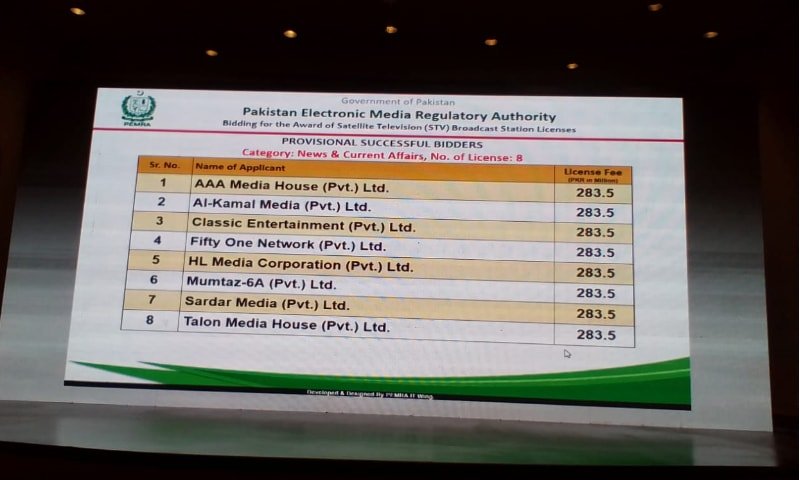 The Pakistan Electronic Media Regulatory Authority (Pemra) on Wednesday initiated an auction at its headquarters in Islamabad for the issuance of 70 more licences for satellite TV broadcast stations.

The auction will continue until tomorrow during which licences will be auctioned in seven categories — news, current affairs, education, sports, health, entertainment and agriculture.

Representatives from 187 companies have been participating in the auction.

According to the details, licences for eight new channels will be offered in news category, 27 in entertainment, 12 channels of regional languages, 12 in education, five in sports, four in health and two in the agriculture category.

As many as 21 companies participated in the open-bid round for auction of eight licences for news and current affairs. Out of the 35 companies pre-qualified for the auction, 14 didn't take part. Al Kamal Media Private Company placed the highest bid in the sector at Rs283.5 million.

Pemra Chairman Saleem Baig inaugurated the auction. In his speech, he said that 70 licences will be issued today. He hoped that each TV channel would provide livelihood to a large number of people.

He said that the authority works in consultation with all stakeholders. Currently 88 local TV channels and 227 radio channels are being operated in the country. He said that eight Internet Protocol TV licences have been issued, besides one DTH which is expected to be operational soon.