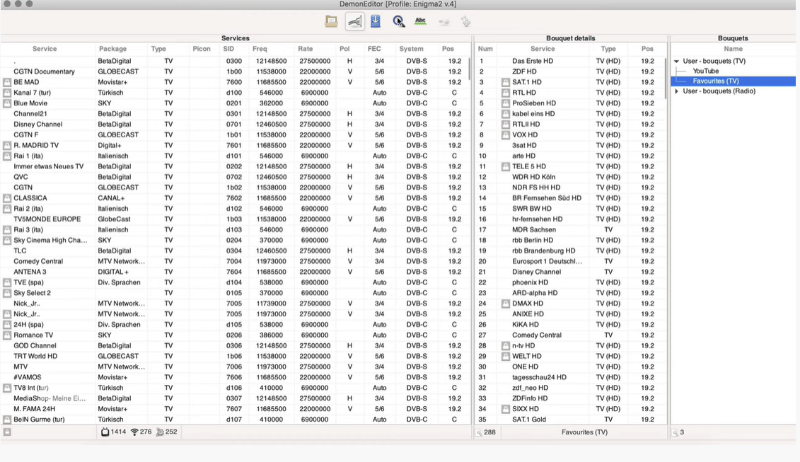 Experimental support of Neutrino-MP or others on the same basis (BPanther, etc).
Focused on the convenience of working in lists from the keyboard. The mouse is also fully supported (Drag and Drop etc)

Main features of the program:

*Editing bouquets, channels, satellites.
*Import function.
*Backup function.
*Extended support of IPTV.
*Support of picons.
*Downloading of picons and updating of satellites (transponders) from the web.
*Import to bouquet(Neutrino WEBTV) from m3u.
*Export of bouquets with IPTV services in m3u.
*Assignment of EPGs from DVB or XML for IPTV services (only Enigma2, experimental).
*Preview (playback) of IPTV or other streams directly from the bouquet list (should be installed VLC).

Launching:
To start the program, in most cases it is enough to download the archive, unpack and run it by
double clicking on DemonEditor.desktop in the root directory, or launching from the console
with the command: ./start.py
Extra folders can be deleted, excluding the app folder and root files like DemonEditor.desktop and start.py!

Note:
To create a simple debian package, you can use the build-deb.sh.
Users of LTS versions of Ubuntu or those based on them can use PPA repository.

The program is tested only with openATV image and Formuler F1 receiver in my favourite Linux distributions
(the latest versions of Linux Mint 18.* and 19* MATE 64-bit)!

Important:
Terrestrial(DVB-T/T2) and cable(DVB-C) channels are only supported for Enigma2!
Main supported lamedb format is version 4. Versions 3 and 5 has only experimental support!
For version 3 is only read mode available. When saving, version 4 format is used instead!

When using the multiple import feature, from lamedb will be taken data only for channels that are in the
selected bouquets! If you need full set of the data, including [satellites, terrestrial, cables].xml (current files will be overwritten),
just load your data via File/Open and press Save. When importing separate bouquet files, only those services
(excluding IPTV) that are in the current open lamedb (main list of services) will be imported.

Users browsing this forum: No registered users and 5 guests